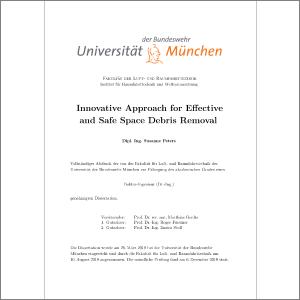 If you experience problems opening the document, please try this link.
Authors:
Peters, Susanne
Document type:
Dissertation / Thesis
Title:
Innovative Approach for Effective and Safe Space Debris Removal
Advisor:
Förstner, Roger, Prof. Dr.-Ing.
Referee:
Förstner, Roger, Prof. Dr.-Ing.; Stoll, Enrico, Prof. Dr.-Ing.
Submission date:
26.03.2019
Date oral examination:
06.12.2019
Publication date:
20.05.2020
Year:
2019
Language:
Englisch
Subject:
Satellit ; Weltraummüll ; Abfallbeseitigung ; Fuzzy-Logik ; Simulation ; Hochschulschrift
Keywords:
Space Debris Removal
Abstract:
This work investigates an innovative approach for effective and safe space debris removal. The threat of space debris for the safe operation of satellites in Earth’s orbit increased rapidly over the last few years. Space debris is a growing human-made issue. More and more satellites are launched into space, older ones reach their end-of-life without being taken care of. Some re-enter the Earth’s atmosphere uncontrolled and may harm life on Earth. Others explode in space and add to the already large number of objects. Avoidance maneuver, confirmed guidelines to slow down the rising amount of uncontrolled bodies orbiting Earth, and developed mechanisms for better observation and prediction of trajectories will have to be supported by the actual removal of objects. The objective of this study is to provide an effective and safe approach for active debris removal as a tool to actually limit the number of objects in low Earth orbit. Effective as at least five large objects per year will have to be removed to make a difference within the predictions and avoid the escalation of the cascade effect already initiated. Safe as the scenario is highly critical due to an uncooperative target with unknown rotation rate, no signal reflectors, and an absent pre-designed point of contact for the berthing process. As the approach scenario is also time-critical, the implementation of on-board decision-making processes is promoted. The thesis starts with an introduction into the subject of space debris and its threat for humans on Earth and objects in space. Presented are measures already considered and taken. Additionally, the challenges of active debris removal are presented. As a next step, a mission for a multiple target removal is developed. Targeted are five SL-8 rocket bodies orbiting in close proximity at an inclination of 83 deg and an altitude of about 980 km - an area crowded with space debris. The mission itself consists of a main satellite (ADReS-A) and multiple De-orbit Kits. The mission set-up enables ADReS-A to carry and attach one De-orbit Kit at a time to a target. There, the Kit serves as thrust extension and allows for an active removal of the large debris. While the main satellite carries one single Kit to the target, berths with it, and stabilizes the compound system, the other Kits wait in a different orbit for their transportation. Calculations for a fuel-efficient shuttling scenario are given. The system architecture then provides a more detailed set-up of the two different kind of spacecraft including a CAD-model and a mass- and power budget. The combination of ADReS-A and one Kit results in approximately the same weight and similar size as the targeted rocket body. The safety of the mission and on-board decision-making concepts are addressed by the self- & failure-management. Different requirements for such mission are presented, a fault tree analysis of possible failures for ADReS-A is developed. The decision-making concept of fuzzy-logic is chosen as most suitable at this stage of the mission development. Based on the fault tree analysis, fuzzy rules are developed with actions on how to react in various cases assigned. On the basis of the results of the investigations described above, a simulation is developed to test for different scenarios. An analysis on different set-ups frames the capability of the introduced approach. In conclusion, active debris removal is necessary to enable future space operations. The presented mission with its possibility for an abort during the final approach is one suitable approach for such removal mission.
DDC notation:
629.467
URN:
urn:nbn:de:bvb:706-6527
Department:
Fakultät für Luft- und Raumfahrttechnik
Institute:
LRT 9 - Institut für Raumfahrttechnik und Weltraumnutzung
Chair:
Förstner, Roger
Open Access yes or no?:
Ja / Yes